Templeton Guide|Thursday, January 20, 2022
You are here: Home » Top Stories » Woman trapped in car thanks her rescuers

Woman trapped in car thanks her rescuers 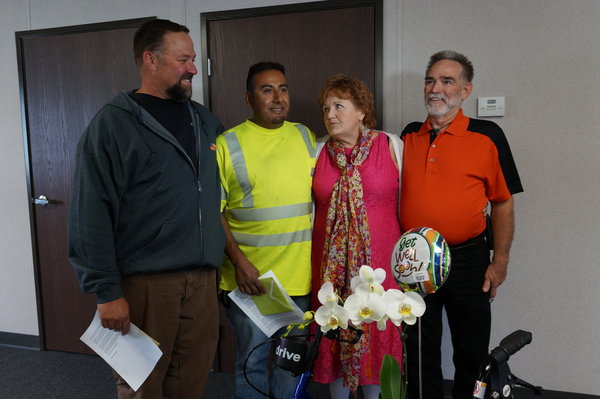 –On Wednesday, Apr. 27 Paso Robles resident, Polly Manson reunited with her rescuers, Caltrans Templeton North maintenance workers Sean Moore and Reuben Granado for the first time, to thank them for saving her life the morning of Friday Nov. 13, 2015 after she hit a tree while driving and fell 40 foot down an embankment spending the night trapped in her car.

On the night of Thursday Nov. 12, 2015 between 6 p.m. and 8 p.m. Manson was driving northbound on Highway 101 near the 46 East exit in Paso Robles when she hit a tree sending her car down the embankment. Manson, a home care professional, was only wearing nursing scrubs and a light sweater and was kept slightly warm by the air bags which all deployed, as temperatures dropped to 40 degrees. In the crash she broke both arms, both legs, her back and her sternum, and she couldn’t cry for help as she knew no one would hear her.

Manson said after she realized no one was coming, she gave herself a purpose to reach and find her phone, she prayed and sang hymns to stay calm. “Having a plan was really important to me,” she said. “I was in a lot of pain, I knew I was in shock, I kept using my hands without realizing both my wrists were broken.”

The next morning, Moore and Granado noticed some broken tree limbs on the highway and decided to take a closer look, finding the vehicle with Manson down the embankment. Granado said they were very surprised to see the car. “We tried to break the back window but couldn’t so I jumped on Sean’s shoulders and got in through the sunroof,” he said.

Moore said they asked her name and checked she was coherent, she said she was cold and they gave her their jackets. “Our job can be very dangerous and we are trained to expect this kind of thing, and we operate as first responders,” he said. When Manson heard Moore and Granado, all she could do was to burst out crying, not believing someone had found her. After that, California Highway Patrol took over. “I started crying once I saw their faces, I tried to stay as calm as possible but when I saw them I knew it was all over,” Manson said.

Tom Manson said he was out looking for his wife with a pastor friend and prayed outside of the Walmart in Paso Robles, they prayed for guidance to find where she was or have someone find her. Fifteen minutes later, he said, he got a call informing him that two Caltrans employees had found his wife, who was very lucky to still be alive. “We were out searching for her and we met and tried to come up with a better plan,” he said. “We asked God to tell us where she was and 15 minutes later we got a phone call,” he said. “We are just so thankful there was no internal injuries.”

Manson underwent five surgeries, spent 25 days at a Fresno Hospital, three months at Sierra Vista Hospital in San Luis Obispo and is currently still going to rehabilitation therapy in Arroyo Grande, to learn to walk again. In total she has spent 120 days in various hospital and was just released on Mar. 19, 2016.

Manson said it was her wish is to be able to personally meet and thank Sean and Reuben for noticing those broken branches and not driving on by, and most of all, for saving her life. “Every day I am alive, I want them to know what they did was an act of bravery,” she said.