Templeton Guide|Sunday, September 20, 2020
You are here: Home » Resources » Where does Templeton’s water come from?

Where does Templeton’s water come from?

The district relies on a combination of several different water sources to provide a sustainable water supply to its customers. Water sources include aquifer groundwater, underflow water, and water supply augmentation through treated wastewater retrieval and importation of Nacimiento raw water.

The Atascadero basin has a distinct hydraulic separation from the main Paso Robles basin defined in the study prepared by Furgo, the district’s hydro-geologist consultants.

Furgo has further evaluated the portion of the Atascadero basin underlying district wells, informally named the Templeton Subunit, in its August 2013 report titled Updated Templeton Subunit Study. At this time, the district is capable of meeting the seasonal average daily water demands of the district. 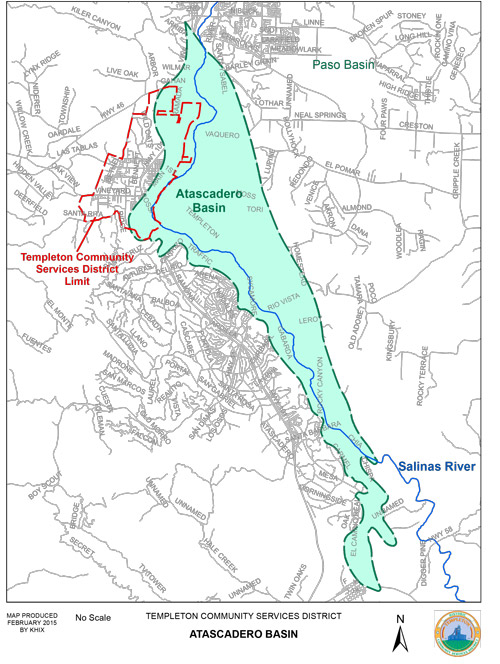 The water supply sources are further described below:

The district extracts percolating groundwater from 10 active deep wells. A perennial yield of 1040 acre-feet per year (AFY) may be used as an operational guide for the 10 deep wells. This water is available year round, however these wells are used primarily to meet summer demands.

The district discharges treated wastewater into discharge ponds (Selby ponds) located adjacent to the Salinas River where it is percolated into the underflow of the river. The water may be retrieved, less two percent, 28 months later at the Smith River Well, or 35 months later at the Creekside River Well. At the current average discharge of 150,000 GPD, this provides an additional 164 AF of water available annually. Due to the locations of the two wells, all of the water discharged at the Selby ponds can be retrieved during the summer pumping season from April through October.

The district began receiving raw Nacimiento water deliveries on June 23, 2011. The raw water is also percolated into the underflow at the Selby ponds for subsequent retrieval downstream. Retrieval of the water at the Smith Well and Creekside Well will net approximately 245 AF annually. The Nacimiento water supplements the water supply during the peak summer season and provides some additional source capacity for the district.

The district’s current available water supply from all sources is approximately 2100 AFY. During the 2014 calendar year, district water production was 1350 AF. Actual water use peaks in July and August.