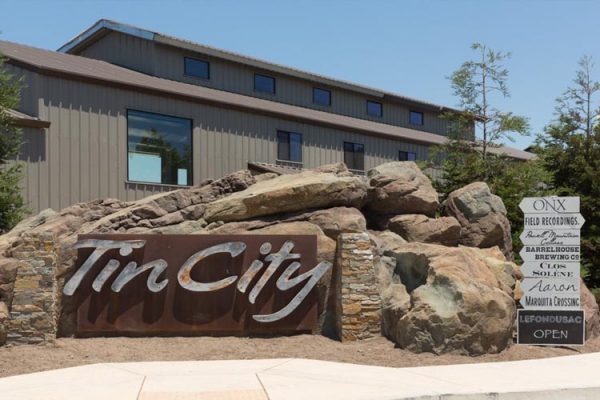 –Tucked away in a commercial warehouse district in between Paso Robles and Templeton is the wine country’s newest and hottest tasting area for wine, beer and spirits, affectionately known as Tin City. This little gem has been rapidly developing into a wine destination spot for locals looking to grab a drink after work and visitors interested in meeting local wine makers and tasting locally produced, high-end and small-batch wines.

The San Jose Mercury News recently reported, “Tin City is on the brink of becoming one of the hottest sipping destinations around. These barn-chic buildings with green and gray corrugated tin walls, are home to some 20 wineries, breweries and distilleries.”

To get there, take the Highway 46 West exit from Highway 101 and turn east onto Green Valley Road. Continue along to Marquita Ave which is the main entrance road to the industrial area. Tasting rooms are sprinkled around the area and mostly located on Limestone Way and Marquita Ave.

The idea for establishing this new tasting destination came from local wine producers who weren’t interested in paying inflated tasting room rental prices found in other popular wine regions, like Santa Barbara, who charge a premium for small tasting room spaces. Instead, these pioneers decided to rent warehouse space in the Paso Robles Tin City area and developed their own hub for pouring small batch wines and producing vintages. They had the right idea, as Tin City has become a unique and exciting place for locals and visitors who are looking for something new and exiting to do in the area.

The first wine makers staked their claim in Tin City about three years ago. Since then the area has blossomed into an up and coming wine scene with over 20 tasting rooms offering a range of libations being produced and poured by the owners on-site, and including wine, hard cider, beer and spirits.

“Tin City has evolved into the epicenter of the burgeoning craft beverage community of Paso Robles,” says developer Mike English. “To date Tin City has attracted over fifteen producers of wine, beer, cider, and spirits. As development continues, look for even more new and exciting members to join the Tin City community”.

Winemaker and owner Aaron Jackson has been producing wine under his own label since 2002 after graduating high school in nearby Cambria. Also a graduate of Cal Poly, Jackson has studied wine making all over the world since then. Jackson uses his vast wine making knowledge to produce truly aromatic and balanced high-end wines. Aaron Wines are produced with fruit grown locally in the Westside districts of Willow Creek, Adelaida, and Templeton Gap. “Vineyards in these areas produce captivating terroir, low yields (<2 tons/acre), meticulous farming, minimal irrigation, and a holistic respect for the land,” says Jackson. Tasting includes vintages produced with Pinot Noir, Viognier, Pinot Gris and Riesling varietals.

BarrelHouse Brewing Company offers beer tastings daily in Tin City. Tours are held Friday through Sunday starting at 2 p.m. Tours will fill up, please arrive early and check in at the bar to secure your spot. Barrelhouse Brewing Company is located at 3055 Limestone Way in Paso Robles, call (805) 296-1128.

Brian Benson started his wine making career in 2001 at the age of 19. He specializes in Rhone-style wines with grapes are sourced from some of Paso Robles’ most respected vineyards, among them Caliza, James Berry and Rolph Family Vineyards. Being a winemaker for close to half his life, Brian says he is constantly tweaking, changing, learning and improving his craft. Come on in, enjoy the wines and personality of Brian, Christina and their 9 month old son Brayden. Every bottle has a story, one that Brian and Christina are eager to share. 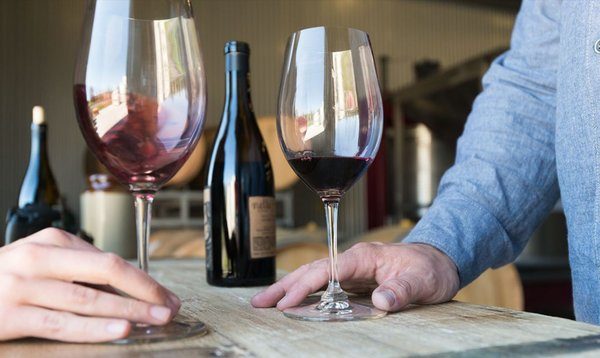 Cordant and Nelle Wines are poured at their tasting room in Tin City.

Cordant and Nelle wine brands opened in 2016 a Tin City. Cordant and Nelle Wines, which have a case production of 1200 between the two brands, opened a new 10,000 square-foot custom winemaking facility in 2016 in Tin City. Winemaker Tyler Russell said to date he has been sharing a production space and has been waiting for a building “I have been making wine like this for 10 years and just doing it where I could,” says Winemaker Tyler Russell. “I have survived this long on word of mouth and recommendations. It is nice now, after 10 years, to have a home. The area around Tin City is thriving, and going through a process of development. I am really happy to be a part of the Tin City community, the urban setting is definitely the future.”

One of the most alluring places to taste is Desparada Wines located off Limestone Way. Female owner and winemaker, Vailia Esh, describes her life as “working, loving and living in wine” and has produced a variety of high-end wines with goddess inspiration found across her wine labels and vintage names. Desperada’s interior is beautifully designed with locally crafted tables and decor handcrafted by local lifelong fine woodworker, Quill Chase. The winery also hosts events and dinners throughout the year in which Esh invites Wine Club members, using handwritten invitations, to dine in the winery and enjoy a variety of her vintages.

Among the wineries who call Tin City their permanent home is Field Recordings, who’s owner Andrew Jones was recently named one of Wine Enthusiast’s Top 40 Winemakers under 40. Jones, 35, is a Cal Poly graduate and has been creating mouthwatering and unique wines for years. Additionally, Jones recently co-created his newest venture in Tin City with several other local winemakers called Tin City Cider Company which brews delicate and deliciously balanced hard apple cider in a variety of flavors aged in bourbon casks made using only California grown fruits.

Bret Urness, winemaker and “jack of all trades” for his fledgling label, Levo, opened at new tasting room in Tin City earlier this year. Urness is a Garagiste-style winemaker currently producing under 1000 cases. He is one of many young, cutting-edge winemakers who have taken up residence in the burgeoning Tin City tasting complex in Paso Robles. Urness has received praise and 90+ point scores on several wines from Josh Raynolds of Antonio Galloni’s Vinous Media.

After seven vintages, ONX Wines is opening its first winery and tasting room in 2015 at Tin City. The tasting room features a rustic industrial feel that is in line with the Tin City vibe. ” We are enjoying contributing to the Tin City development, which is quickly becoming known as the stomping grounds for Paso’s boutique winemakers,” said ONX Director of Sales and Marketing Ann Day-Willis. “Our winery workspace is fully visible from the tasting room area, where guests will enjoy seated tastings and shared educational experiences.”

Bill and Kim Powell founded Powell Mountain Cellars in 2010. Bill Powell studied viticulture primarily focusing on perfecting individual varietals and blends from Rhone- and Bordeaux-style grape varietals from many viticulture regions across the state of California. Today, he works with those same varietals that the Powells describe as both “elegant and bold, and concentrated in flavor.” Powell Mountain Cellars grows six varietals on six acres, producing an average of 1,100 cases each year at this very small and personal winery.

Tin City Cider is a collaboration of three wine makers, Curt Schalchlin, Mikey Giugni and Andrew Jones, who decided to combine their skills and try their hand at producing the best ciders possible. The trio say they are dedicated to crafting the highest quality ciders using only California grown ingredients and are making waves in the cider scene with their unique and robust flavors.

Top Winery is currently pouring out of the barrel room at the Nicora/Torrin winery in Tin City. “We’re focusing on Rhones – Syrah, Grenache, Mourvedre, and Roussanne,” says owner Stanley Barrios. 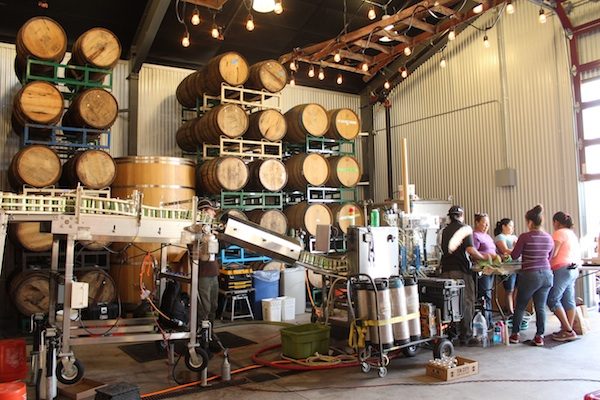 There’s a real sense of camaraderie among the tasting room owners in the area where the winemakers are all friends, lend a hand when their neighbors are in need, and speak highly of one another. Rather than creating competition, they are focusing on building a community where everyone’s light can shine — this is truly the spirit of the Central Coast.

Please share your experiences at Tin City in the comments section below.