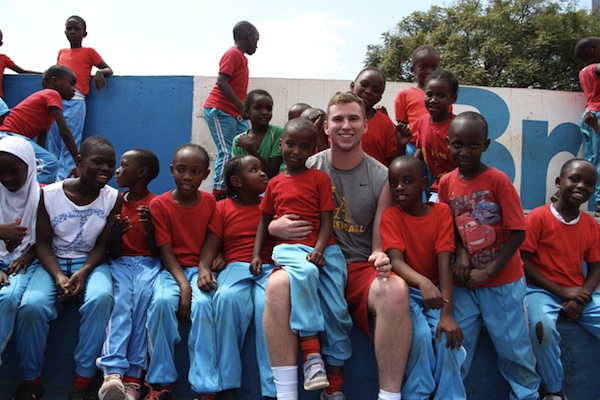 “People say that it feels better to give than receive. You see how much you really impact people just by being there,” said Kaiser, who lives in Templeton in central California. “It was really rewarding for me.”

The 19-year-old is majoring in business administration with an option in entrepreneurship and plans on minoring in communication. His goal is to become an agent representing professional athletes. He also would like to open his own restaurant, since he enjoys cooking in his spare time.

Cal State LA’s Executive Director for Athletics Daryl Gross lauded Kaiser for his efforts on and off the court. “Robby exemplifies the values we look for in our student-athletes,” Gross said.

While in Kenya, Kaiser and others in his group visited schools around the capital of Nairobi, where they held clinics and talked about valuable skills that can be gained through participation in sports. “Through basketball you can actually improve your life,” Kaiser said.

Hakuna matata, a Swahili phrase that roughly means “no worries,” is a common expression in Kenya where life can be tough. It reflects an attitude that Kaiser witnessed in many people. “That just really impacted me because I get upset because Wi-Fi is slow or I don’t like my shoes that I’m wearing,” said Kaiser.

The kids Kaiser coached were eager to listen and learn from him. “They’re so incredible,” he recalled.

Kaiser and his Athletes in Action teammates honed their skills playing in a tournament against tough competition from Kenyan universities such as Strathmore University and University of Nairobi. The Kenyans played great basketball, helping Kaiser raise his game for next season with the Cal State LA Golden Eagles.

Aside from playing basketball and coaching clinics, Kaiser was able to experience the culture as he traveled around Kenya. His group went on a safari in Lake Nakuru National Park and visited an elephant orphanage.

Kaiser and his group also visited Soweto Academy, a primary school located in Nairobi, which has no basketball court. Kaiser said he would like to help raise funds so the academy can build a court.

Kaiser is looking forward to returning to Cal State LA in the fall and a great season with the Golden Eagles basketball program.

“Robby Kaiser is what our students are all about—dedicated to discovery, concerned about others, and willing to take action,” said Cal State LA Executive Vice President Jose A. Gomez. “We’re proud of his accomplishments.”