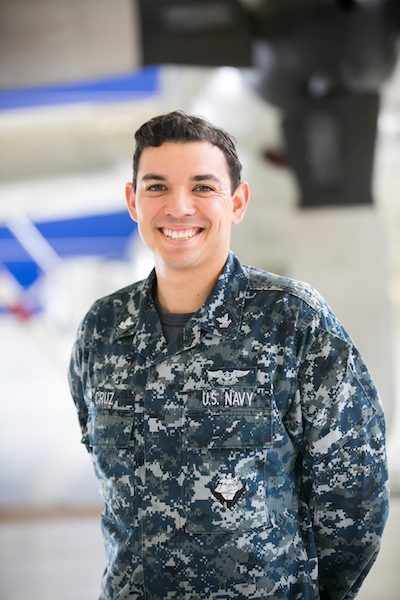 A Navy aviation electronics technician is responsible for maintaining and repairing aircraft communications, navigation and weapon targeting systems on the P-3C Orion.

“I love working on aircraft and solving problems, and every P-3 is a snowflake,” said Cruz.

According to Navy officials, Wing 10 has continued to fly combat missions in direct support of the troops on the ground and delivered traditional maritime capabilities, real-time intelligence, surveillance and reconnaissance.

Beginning in the 1960s, the P-3C Orion, a land-based, long-range anti-submarine warfare patrol aircraft, replaced the P-2V Neptune fleet. After 50 years of faithful service and the 50th anniversary of Maritime Patrol and Reconnaissance Force, the P-3C Orion is being phased out of the fleet and replaced by the P-8A Poseidon, according to Navy officials.

“Patrol and Reconnaissance Wing 10 mans, trains, and equips P-3 and P-8 squadrons to deploy anywhere, anytime,” said Capt. Rob Patrick, Commodore of Patrol and Reconnaissance Wing 10 at Naval Air Station Whidbey Island. “This is critically important as we are the eyes and the ears of our national defense, putting pressure on strategic locations around the world. Our sailors are the single biggest asymmetric advantage that allows us to succeed at our missions. Without their agility and expertise, we would not be able to do what we do.”

Cruz is part of a crew striving to be the best Naval Aviation Wing in the United States, according to Navy Officials. Their mission is to safely build and maintain a team of sailors capable of conducting prompt and sustained combat operations.

“I’ve only been onboard a short time, but this command lives up to its reputation, fleet’s first and finest,” Cruz said.

According to Navy officials, the Navy continues to meet milestone after milestone on this world-class mission and is providing an aircraft with superior capabilities to the men and women in uniform that will have a lasting legacy promoting a global maritime strategy.

“For me, providing service to my country and paying it forward so that those who come after me will do the same is why I serve,” Cruz added.