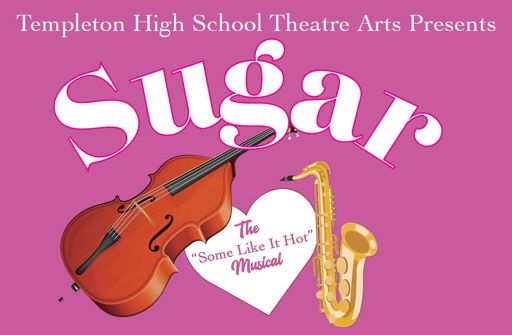 – Templeton High School Drama presents Sugar, a musical with a book by Peter Stone, music by Jule Styne, and lyrics by Bob Merrill. It is based on the 1959 film Some Like It Hot starring Tony Curtis, Jack Lemmon, and Marilyn Monroe, and directed by Billy Wilder.

Just in time for spring, this production aims to “lift your spirits and start your toes tapping.” Two unemployed musicians, bass player Jerry (Sophia Mackle) and saxophone player Joe (Cole Fairchild), witness the 1929 St. Valentine’s Day Massacre in Chicago. In order to escape gangster Spats Palazzo (Rosalie Garcia) and his henchmen, they dress as women and join Sweet Sue (Frances van den Eikhof) and Her Society Syncopaters, an all-female band about to leave town for an engagement at a Miami Beach hotel.

Complications arise when Joe, now known as Josephine, falls in love with beautiful band singer Sugar Kane (Katelann Harms), who has had a history of unwise choices in romantic partners. More than anything, Sugar wants to marry a millionaire, prompting Joe to disguise himself as the man of her dreams. Meanwhile, wealthy and elderly Osgood Fielding Jr. (Joe Lusk) is pursuing Daphne, unaware she really is Jerry in drag. As much as he knows he needs to reveal his true gender to his over-amorous paramour, Jerry is beginning to enjoy all the expensive gifts bestowed upon him on a regular basis.

Total chaos erupts when Spats and his gang descend upon the hotel and realize who Josephine and Daphne really are.

According to director Catherine Kingsbury, Spats and his gang tap-dance wherever they go; their machine gun “fire” is created with their tap shoes. No guns are displayed in the show. Also, casting was not gender-specific, even though the main premise is about two men dressed as women.

The score includes such lively numbers as “When You Meet a Man in Chicago,” “Beautiful Through and Through,” and “It’s Always Love.” You won’t want to miss this sparkling comedy!

There will be following COVID-19 protocols in place (may change based on county guidelines):

• Attendees are encouraged to wear masks the entire time they are inside the theater.
• Exit outdoors immediately after the show; please don’t wait inside the lobby.
• Remain in seats until intermission or the end of the show.
• Be sure to sit in assigned seats.
• Distance as much as possible from other audience members