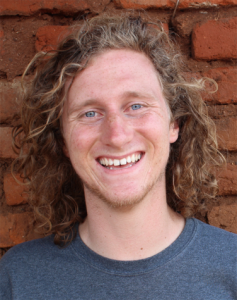 Chris Apple, an environmental engineering major from Templeton, is part of the Cal Poly EWB team.

–Templeton resident and environmental engineering student at Cal Poly Chris Apple, who is part of an Engineers Without Borders (EWB) USA team, has won the 2016 Premier Project Award for a bicycle-powered maize mill. Cal Poly was one of three student chapters out of more than 200 nationwide to receive the award.

The Cal Poly-EWB team designed the mill for residents of Kumponda, Malawi, in southwestern Africa. The community has a limited growing season and other food-production challenges. In order to grind maize into flour to make nsima, a food staple of the region, villagers must travel hours by foot twice a month to access a costly electric maize mill that is also unreliable due to power outages.

The student-designed bicycle-powered mill makes maize production more economical and reliable. The EWB Malawi team, made up of some 20 students, designed and developed prototypes on campus with help from mentors in industry.

Apple said, “Throughout the year, we continually communicate our progress and incorporate suggestions from the village via our NGO partner, Action for Environmental Sustainability.” 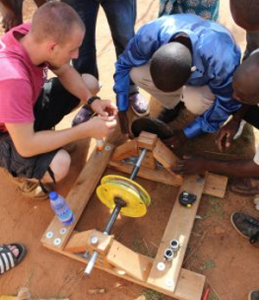 Jemes said the community members have shown unbelievable commitment and enthusiasm toward the project. “They impressed us every single day with their ideas for the mill, while keeping an open mind for collaboration.”

Kraska said, “When our implementation visit was over, everyone was excited about the progress we and the Kumponda community made toward implementing a sustainable solution to hunger.”

Engineers Without Borders-USA is a nonprofit humanitarian organization that partners with developing communities across the globe to improve their quality of life. The partnership implementing sustainable engineering projects, while involving and training internationally responsible engineers and engineering students.