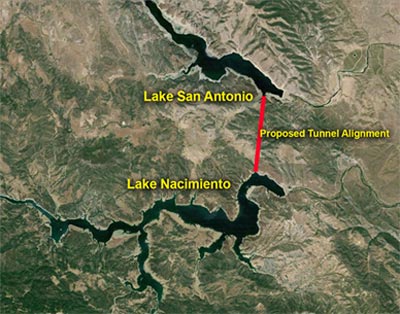 “SB 831 is crucial to Monterey County and I want to thank the governor for signing the bill,” said State Senator Bill Monning, who represents San Luis Obispo and Santa Cruz counties, and portions of Monterey and Santa Clara counties.

“The allocation of the $10 million for the construction of the Interlake Tunnel will improve water reliability and provide flood control to the region, as well as provide environmental and economic benefits to the Salinas Valley.” Monning said has been working closely with Senator Anthony Cannella and Assemblyman Luis Alejo, and other regional stakeholders for a number of years to advance this project. “I am extremely pleased that it will now be moving forward.”

The Interlake Tunnel is planned to consist of an 11,000 foot gravity flow tunnel with an intake structure in Nacimiento Reservoir and an exit structure in San Antonio. Total project cost is estimated at $48 million, according to the Monterey County Water Resources Agency. Though some estimates are as high as $76 million. The remainder of the project cost would be paid through a property-based assessment on Salinas Valley beneficiaries of the tunnel.

Depending upon the degree of environmental documentation required the Interlake Tunnel could be completed in two to three years, the agency says.