–While many around California experienced the flyover of the Air National Guard that spanned through much of Northern California and the Central Coast Wednesday, employees and staff got a more personally-connected salute courtesy of the Freedom Flight team at the Estrella Warbird Museum in Paso Robles.

“I was fortunate to be asked to fly among the Freedom Flight team and to be able to show my appreciation and respect for all that the Tenet Health Central Coast team does for our communities – not just this week, or during a crisis, but every day,” said Lisa. “It is very important to recognize front-line workers and it is National Hospital and Nurses Week, so George Marrett thought it would be a great honor and I thought it would be good to tag along. This was a great gesture on the part of the Estrella Warbirds Museum.”

“Last week, we saw the Thunderbirds and Blue Angels fly over Washington, and I thought, ‘why don’t we do the same thing for our local heroes?” said Marrett. “We’re used to flying in formation here at the Estrella Warbirds Museum for Veterans Day and Memorial Day, so it was an easy choice. Then we found out Mark was a pilot and we said, ‘OK, you can lead the formation.’ It doesn’t get much better than that.”

The tradition of a flyover dates back to before the 1920s as a ceremonial or honorific flight to show respect for those on the ground. The theme of the Freedom Flight team was “America Strong” to honor doctors and nurses during Hospital Week. 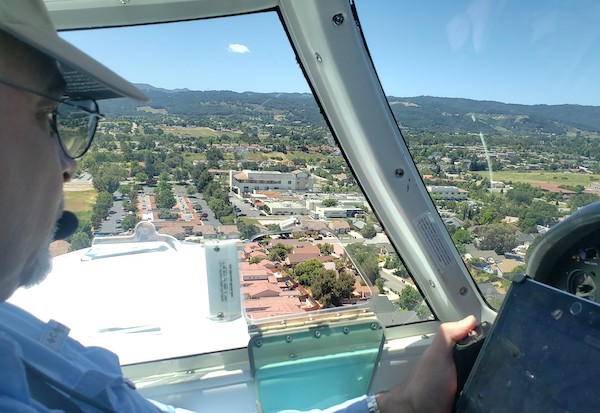 The theme of the Freedom Flight team was “America Strong” to honor doctors and nurses during Hospital Week.