Paso Roblans turn out to wish city a happy 125th

On the afternoon of Tuesday, March 11, 2014, hundreds of community members lined the streets of downtown Paso Robles as the Paso Robles High School Bearcats marching band led a school parade around the City Park to kick off a very successful “Happy Birthday Paso Robles” event. 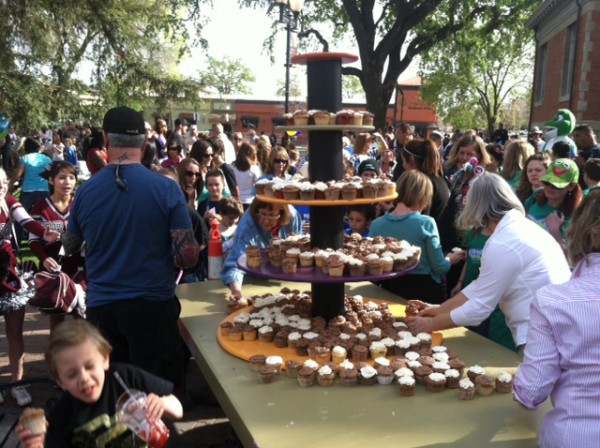 Organized by the 125th Anniversary Committee and members of the Paso Robles Unified School District, activities were held Tuesday afternoon to celebrate the 125th anniversary date of the city’s incorporation. As numerous school children marched around the park and towards the front of the Carnegie Library, the crowd continued to expand and fill the downtown area in anticipation of the arrival of a special letter delivered by a stagecoach.

The stagecoach, provided by Harris Stage Lines, had traced a route from the San Miguel post office to the City Park. On board were the postmasters from San Miguel and Paso Robles, along with the letter – postmarked March 11, 2014 – which was later deposited into a time capsule along with other commemorative items. 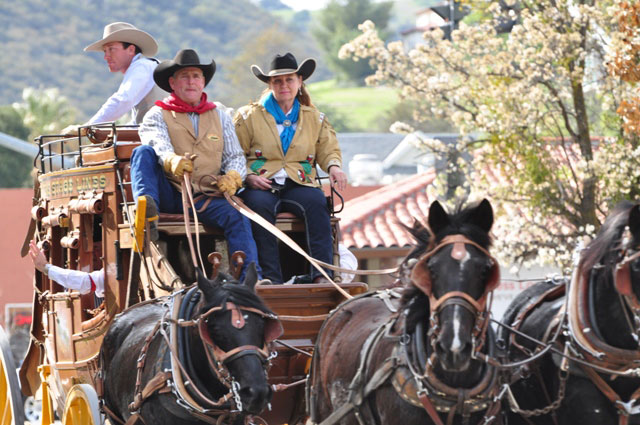 A brief program and speeches by city and county dignitaries preceded the raising of a new city flag by Paso Robles Scout Troop 60 and was followed by a photo session of the large crowd to commemorate the celebration. The Paso Robles Culinary Academy prepared and provided 1,000 cupcakes for the crowd. A commemorative Ginger Ale, produced especially for the 125th Anniversary, was offered by Pithy Little Wine Company & Soda Works.

The event included a brief program and speeches by city and county dignitaries.

In addition, the crowd enjoyed a railroad memorabilia display, an opportunity to learn about the early history of the area, and the 125th Anniversary Kids Historical Scavenger Hunt was unveiled. Forms for the scavenger hunt were distributed and will continue to made available at the Visitor Center, located at 1225 Park St.; the Paso Robles Historical Society, inside the Carnegie library in the park, and at the Paso Robles Pioneer Museum, located at 2010 Riverside. Pick up the map, follow clues through downtown, answer historical questions and have a chance to win prizes such as passes to the Ravine Water Park, Mid-State Fair, movies and more; prizes will be awarded three times in 2014. 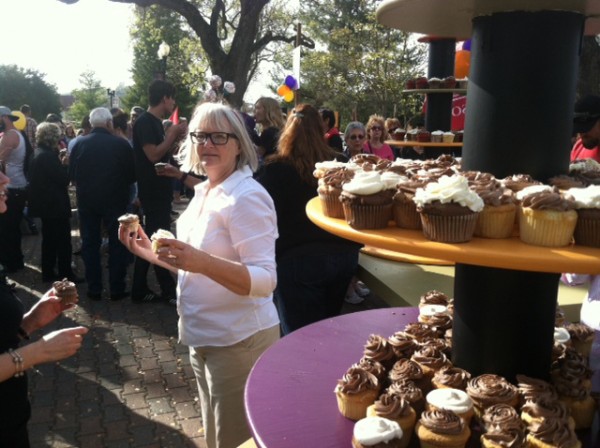 1,000 cupcakes were provided by the Paso Robles Culinary Academy.

2014 marks the 125th Anniversary of Paso Robles incorporating as a city. A full year’s worth of events was kicked off with a fireworks and New Year’s celebration on Dec. 31, 2014. Up next, the community will hold a newly-imagined 4th of July celebration; an Old-Fashioned Family Fun Day in the park during Pioneer Day; an Historic Women’s Day; a 12.5-mile Fun Run and much more before the year ends with a fireworks finale on Dec. 31. For a complete list of events celebrating the 125th anniversary throughout 2014, go to www.paso125.com.

Winifred Pifer students have fun along the parade route. 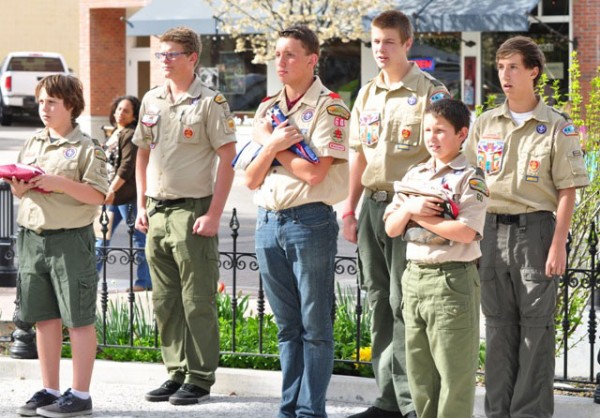 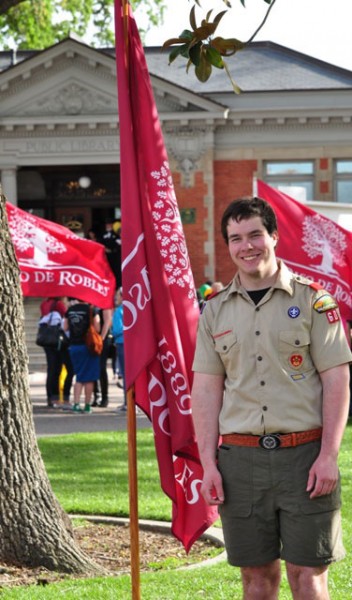 PR Troop 60 scout & PRHS senior Joseph Fairchild organized efforts for flags lining Spring St. and throughout the city park as well as the flag ceremony as part of his Eagle Scout project. 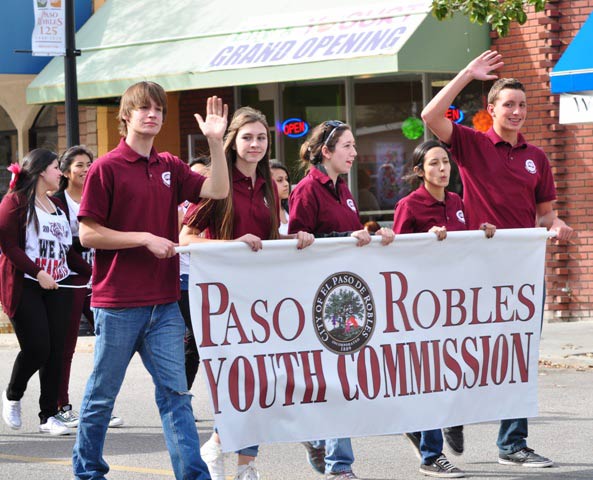 Members of the Paso Robles Youth Commission proudly display their banner along the parade route. 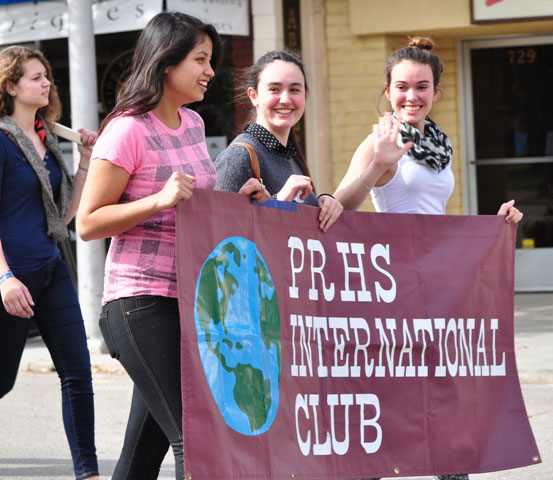 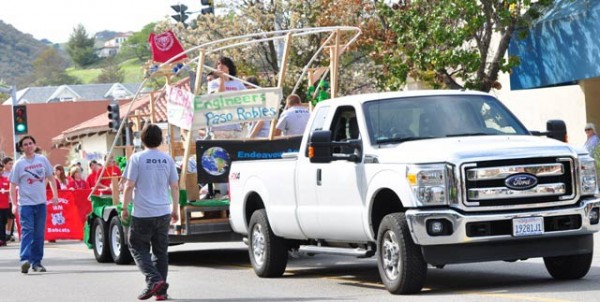 PRHS Engineering students of the Endeavor Academy thrilled the crowd with their antics. 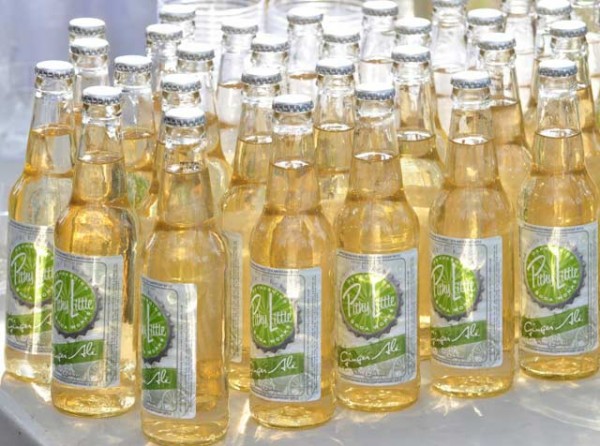 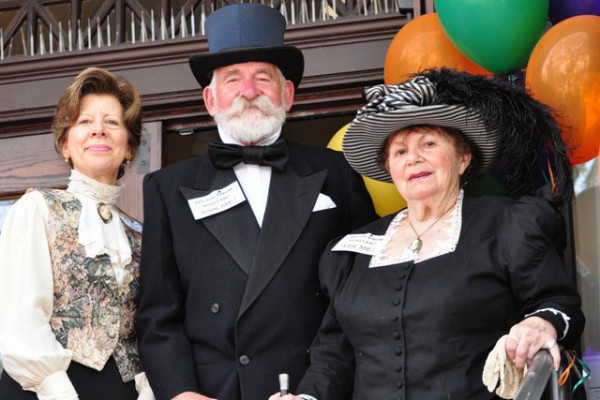 Dressed in attire of the era, locals play the part of Louisa James, Andrew Carnegie and Cecelia Blackburn. 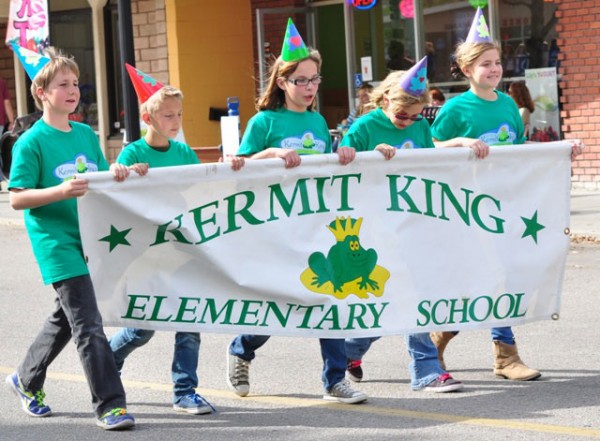 Students from Kermit King march along the parade route.

The Flamson marching band plays for the crowd. 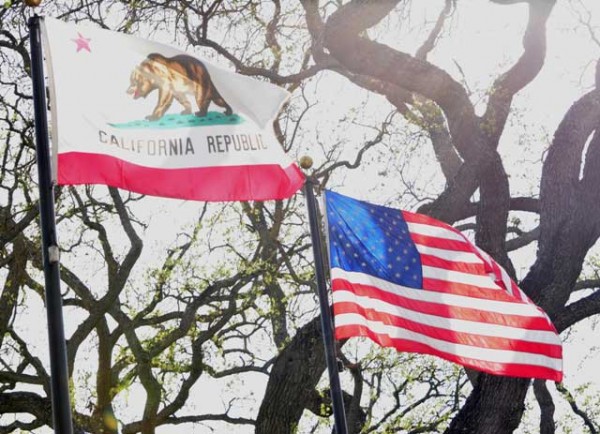