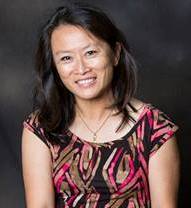 –Shirley Sigmund received her bachelor’s and master’s degrees in Communicative Disorders from Cal State University Fullerton and has been a licensed speech pathologist since 1990. She has worked in acute care, home health, skilled nursing facilities, pre-K through 12 school settings, and outpatient services. Shirley believes the basis of being human is the ability to communicate; her passion is assisting individuals achieve the most effective and authentic communication possible.

Shirley is a first generation Chinese-American and speaks conversational Chinese (Cantonese dialect). She has been to China three times; first in 1982, not long after President Nixon opened the doors to China; in 2001, she accompanied her grandfather and father to his paternal village; and, in 2012, she and her family took a trip to see both her mom and dad’s villages in Southern China. Visiting China over three decades allowed her to witness great changes in the economy and socio-political life of everyday Chinese citizens.

In addition to her speech language pathology work, Shirley is an active volunteer and sits on three other boards: she is a director on the Templeton Education Foundation’s board, is currently President of the Board of Trustees for Templeton Unified School District, and is a member of the SLO County UC 4-H Youth Development Program’s 4-H Expansion & Review Committee (Affirmative Action).

She and her husband, Stephen Sigmund, M.D., moved to SLO County from San Diego in 1995, when they opened up Steve’s internal medicine practice. Shirley and Steve have two sons and a daughter, all of whom are also active volunteers in the community.