Templeton Guide|Wednesday, June 23, 2021
You are here: Home » Sports » After loss to Royals, Eagles will face Pirates on Friday

After loss to Royals, Eagles will face Pirates on Friday 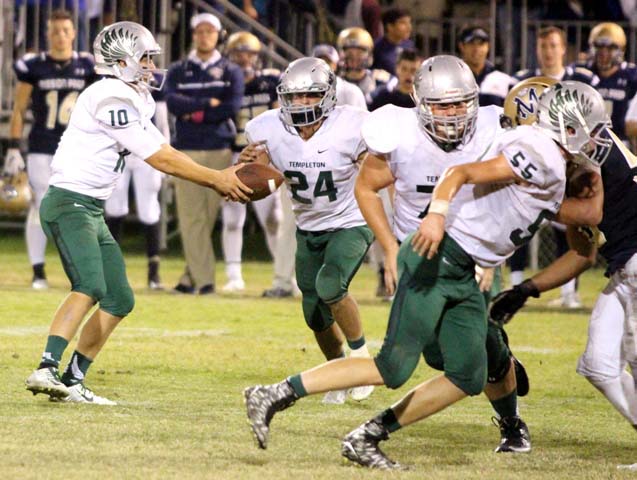 Templeton quarterback Jordan Bernal makes the hand-off to Michael Capelli. Bernal finished with 16 passes for a total of 229 yards and a touchdown in the Eagles’ 19-14 loss to the Mission Prep Royals. Photo by Penny Fuentes

–The Templeton High School varsity players traveled to San Luis Obispo last Friday to do battle with Mission Prep for the first Northern League game of the season in a game that had the Royals outlasting the Eagles, 19-14.

Quarterback Jordan Bernal had 16 passes for a total of 229 yards and a touchdown, with  Angel Avelar successfully kicking in both extra points for Templeton (4-3). 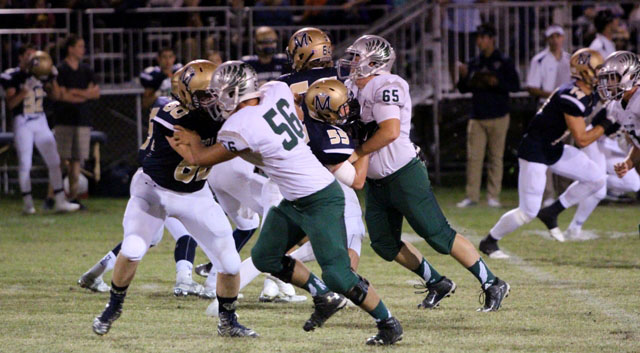 The Templeton Eagles defense turns up the heat on the Mission Prep Royals. Photo by Penny Fuentes

It was a tough battle, with both teams fighting strong until the very end, but Mission Prep (4-2) secured the close win for their home crowd with a final score of 19-14.

The Eagles are back on the road again this Friday, Oct. 16 to challenge the Pirates at 7 p.m. in Morro Bay; JV at 4 p.m. Mission Prep has a non-conference game in Fillmore against the Flashes (0-6) on Friday at 7:30 p.m.