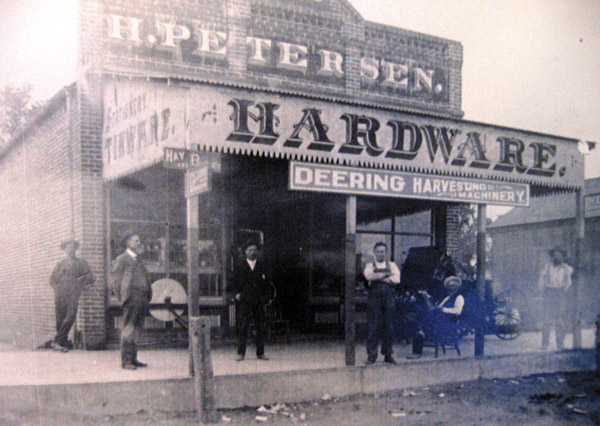 Small but mighty, the site is packed with history

A little white house, sitting back several feet off the street at 309 South Main, contains a wealth of information about historic Templeton. The house is part of a three-building complex that makes up the Templeton Museum. All are invited to stop in for a visit soon.

Upon entering, see a beautiful organ that was brought here during the late 1800s from Colorado when Swedish farmer John Larson relocated to the area. The organ remained in the family until 2010 before being donated to the museum. This room also has artifacts and a tabletop display of historic photos and information about Templeton’s beginnings.

Another room displays vintage clothing, Templeton High School yearbooks, band uniforms, and photos of the first grammar school in Templeton, built in 1897. The three-room schoolhouse, the workplace for three teachers, was used until 1923. Find photos of the high school, which opened in 1916 with a principal-teacher, two other teachers and 30 pupils, including the first graduating class of 1920.

A nearby room features a display of Dr. Elsa (Horstman) Van Soest’s mortarboard and gown worn when she received her medical degree from the University of Southern California in 1908, the only woman graduate in a class with 27 men. Elsa, one of ten children, was born in 1885, grew up in Templeton, and had a general practice in Los Angeles for 60 years.

Templeton was the terminus as the Southern Pacific Railroad built its line southward.

Horse-drawn stagecoaches met the trains and transported passengers to San Luis Obispo where they connected with stages for the south. Templeton remained the end of the line until 1889 when the rail lines were extended 14 miles to Santa Margarita.

In 2013, the museum acquired the former blacksmith shop next door through a generous offer by owner Robert Tullock, Jr. It currently houses one of Templeton’s early school buses, currently in the process of being restored by a group of volunteers.

Times in Templeton have changed over the years from when the first house was built by Chauncey Hatch Phillips, founder/manager of the West Coast Land Company. When the house was completed in 1887, Mr. Phillips moved his wife and children from SLO to prove Templeton, the “wild and lawless part of the north county,” was safe for families. They lived in the house for five years. Nearly 100 years later, in 1981, the house was converted into a bed and breakfast—Country House Inn.

To immortalize the names of family, friends and/or events, the museum volunteers erected a Wall of Honor in the courtyard adjacent to the museum. Bricks for the wall are available in two sizes and range in price from $75 to $125. To order a brick, contact Greg O’Sullivan at gr8go@sbcglobal.net.

Help support the Templeton Museum by becoming a member. Nominal dues range from $10 for retired individuals to $200 for a lifetime membership. Members receive a copy of the quarterly newsletter and are invited to attend quarterly potluck dinner meetings in the depot warehouse, followed by a program of local interest.

The Templeton Museum is open Friday, Saturday and Sunday from 1 to 4 p.m. Admission is free.