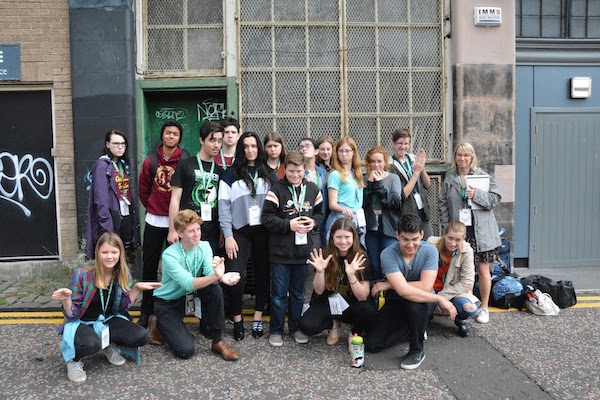 –After working on The Addams Family: A New Musical Comedy for 11 months, Templeton High School Drama students performed at the Edinburgh International Festival Fringe -the largest and longest-running arts festival in the world- in August. Catherine Kingsbury, THS Theatre Arts teacher and director, was recognized by the American High School Theatre Festival as one of the top theatre arts teachers in North America (for the fourth time), and given the opportunity to provide a world-class arts education experience for a group of students.

They departed on July 26 for London, where they toured Shakespeare’s Globe Theatre and had a workshop with a professional Shakespearean actor. The students also watched the Globe Theatre production of A Midsummer Night’s Dream. They had a special backstage tour of the National Theatre, where they got to see how and where props, sets, and costumes are created and stored. They also watched the musical, Wicked, in the West End.

After traveling to Edinburgh, they participated in a musical improv workshop, performed The Addams Family four times (three of them to sold-out audiences), and watched a variety of other performances, both professional and amateur. They learned about the history and culture of Scotland at a traditional “ceilidh”, a Scottish dance party, where they learned folk dances and the history of the kilt. They learned how to ‘busk’ their show, or approach others to hand out flyers with information about their performances. Students also attended the Royal Military Tattoo, which is a performance of marching bands and dancers from around the world, including Scottish pipes and drums, and highland dancers, a steel drum band and dancers from Trinidad and Tobago, marching bands from France and Nigeria, and precision dancers from Switzerland, among many others.

THS Drama and the THS Drama Boosters have worked hard all year to prepare the production and raise the required funds for this arts education program. They sold cotton candy, firewood, and Krispy Kreme donuts, had several restaurant fundraisers, a rummage sale, a sushi dinner, a house concert with Bear Market Riot, a dinner theatre, and several other activities. Many people and organizations donated to the Eagles in Edinburgh fundraising campaign. Many of them are listed on the Drama Booster website (templetondrama.org). The total cost of the program is approximately $142,000 and they raised about $52,000 of that. The rest was paid by the families of the students who participated. 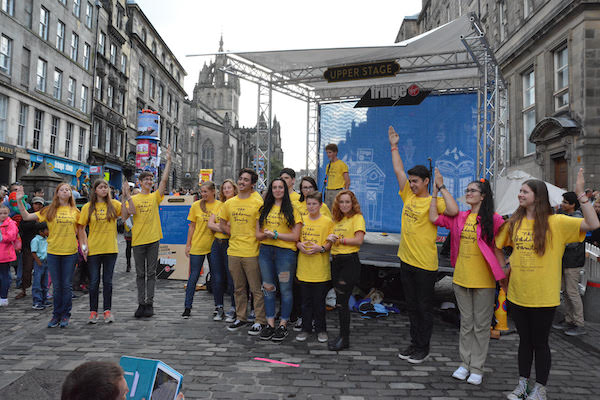 According to Vicki van den Eikhof, THS Drama Booster president, “The Drama Boosters would like to thank all those who contributed to this fundraising effort. World-class theatre arts education opportunities are not easily obtained, and it is heartening to see the community demonstrate such support for arts education and THS Drama. A small town with an amazing theatre that has performing arts programs to match is a rarity. Templeton is truly a special place.”

Templeton High School is among about 40 schools from across North America given this once-in-a-lifetime arts education opportunity. They returned on Aug. 9 and bringing new levels of understanding and enthusiasm for theatre with them.

“For many of the students, this was a life-changing educational experience,” says Kingsbury. “All of them developed a deeper appreciation for theatre, performing, and the opportunities they have to hone their craft right here at home. They also experienced first-hand the world community of theatre, and discovered career options they might not have considered before.”